In today's round there were two English openings and two Petroff defences. Overall, play was 'cautious' as one can see by the results!

Here are the tournament rankings after three rounds.

It's early days but it always helps to get off to a good start and of course any good fortunate comes in handy! For example Leko's win in the second round was on time when there was nothing special for him on the board.

Of all the players, the only one never to have made it to 2700 (so far!) is Ernesto Inarkiev. 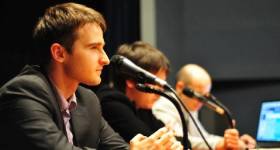 The fourth round is tomorrow. If you want to follow the games as they happen or would like further information on this event, then go to the official tournament site.