Carlsen now has three wins and two draws and the chances of anyone overtaking him are slim.

Kramnik and McShane both have two wins and are well placed for the other important prizes.

The fifth round was perhaps the best so far.

Ni Hua enthusiastically advanced his f-pawn in the middlegame, but this later led to him having too many weaknesses in the pseudo-ending. Carlsen gradually expanded his structure, his queen and bishop dominating White's queen and knight.

Howell and Kramnik indulged in a sharp line of the Petroff which eventually led to an unbalanced and rather double-edged endgame where the Englishman had two minor pieces for Kramnik's rook and two pawns. The game eventually led to a repetition where White cannot make progress, but it was David who was pressing and attempting to avoid any drawish lines. Another honorable performance by him.

Simplification in Adams-Short led to all the play being on the kingside. However despite the limited material various tricky tactics gave the latter stages an agreable impression before fizzling out.

Nakamura-McShane was a bloody tussle in which both players seemed to have winning chances. Luke McShane was the exchange down, and on the defensive, but had a solid pawn phalanx on the left-hand side of the board. Even in the Rook versus Bishop endgame the issue didn't seem clear until fairly near the end, but as the pawns advanced further up the board Black took over.

As there was no winner in round four the public had a difficult choice picking a 'best game' for the round. However they voted for the draw between Carlsen and Nakamura, so the Norwegian now has 2.5/4 on Best game prizes. More good news for super-Magnus.

In the penultimate round tomorrow we notice that Carlsen has White against the unbeaten Adams. Kramnik and McShane also have White. 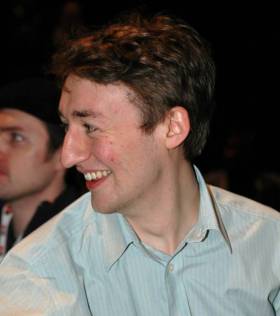 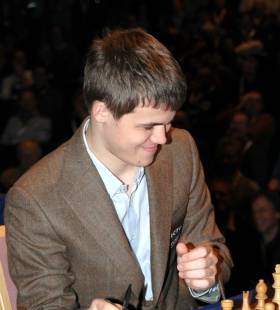