Onischuk obtained some opening pressure against Black's slightly inferior pawn structure. Black's efforts to 'temporarily' sacrifice a pawn for activity didn't convince the American who steered the game into a clearly favourable endgame a 'permanent' pawn to the good.

Nikita Vitiugov and Victor Bologan seems to have come from nowhere and, with their consecutive wins, are in the thick of the hunt along with top seeds Sergey Karjakin and Dmitry Jakovenko.

Both won with Black, Vitiugov after creating an unexpected swindle, and Bologan after breaking free against an IQP attack which left White with a rook offside. The exchange of queens then ensured a superior endgame for Black.

Sergey Karjakin was willing to take on Rublevsky's trademark Scotch and a complicated game ensued in which both players had chances. Karjakin sacrificed the exchange but his attack only led to a repetition.

The final round tomorrow should be decisive. Surely one of the four pretendants will take some risks to win? However if none of them can gain a full point Riazentsev is only half-a-point behind and might yet be able to catch the leaders.

None of the leaders are playing each other and, quite remarkably, all five have White!

You can follow the games live (two hours earlier tomorrow!) on Live games

The tenth round will start tomorrow (Saturday) at 8am (London), 9am (Paris) or 1pm (local time). 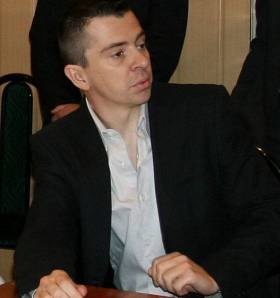