The most striking aspect of this tournament concerned last placed Michel Huerga who only scored 1/9. However a couple of weeks earlier he had won the similar strength Elgoibar GM round robin whilst remaining unbeaten!

Here he came under the cosh as the following two games illustrate:

Meier seems to prefer 'strategic-technical' play and here he shows great patience in gradually getting his bishop pair to shine. 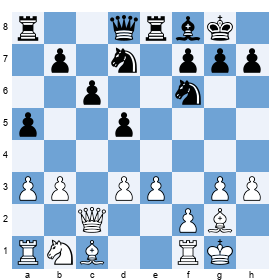 Slowly does it! In fact speed isn't an issue if the opponent has no real counterplay.

Another useful little move as his bishop now has the option of coming to h3.

As Black is going nowhere in the middlegame there is no reason to exchange queens. 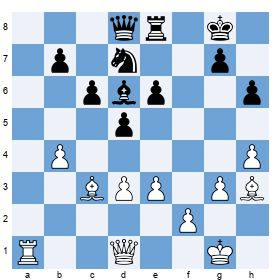 The bishops have lovely diagonals, but for Black things are not yet too bad as his position remains solid.

My feeling is that this quiet move is a mistake and that the time has come for Black to do something more positive.

Another way would be 29...e5 30.b5 ♘c5 with some activity as well as keeping things solid.

The b7-pawn is still a weakness.

A loosening move that shows that things have started to turn sour.

Fixing Black's pawns on dark squares thus ensuring that he is stuck with a bad bishop and vulnerable light squares.

The attention now switches to the c-pawn.

Somewhat risky. Instead 8...g6 has a better reputation, when Black only plays for this break after completing kingside development. 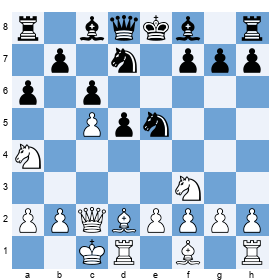 White is now well ahead in development and threatens quick action along the d-file with e2-e4 in mind.

This leads to White obtaining attacking chances along the g-file.

Black's king now becomes too vulnerable, noting that White has superior development and there is no black counterplay in sight.

Further disruption in the black camp.

White threatens to keep capturing on g6 and Black lacks a safe shelter, but resignation is somewhat premature, but I imagine that Huerga was probably dispirited by this stage of the tournament.

The final standings were as follows, with Meier winning due to his superior Sonneborn-Berger, a tie-breaking system which has never impressed me!