Black equalized in the Ponomariov-Mamedyarov clash and during a long series of manoeuvres, both players were probing to find a chink in their opponent's armour. Late on, Ponomariov found a way to seize the c-file and Mamedyarov resigned in the face of the coming king invasion.

Kramnik played the Catalan, another example of this 'in vogue' opening system. Naiditsch sacrificed a pawn 'for play' but Kramnik resisted the pressure and broke out by sacrificing the exchange, safe in the knowledge that his opponent had a rook locked out of play. This fact essentially cost Black the game.

Peter Leko against Le Quang Liem was a struggle between the two bishops and a pair of knights. Black's superior pawn structure eventually became the main factor once the game had simplified. The Vietnamese player obtained a strong advanced pawn which cost White a piece and with Rook, knight and pawn against Rook and two pawns, he was able to mop up White's pawns without losing his own.

Le Quang Liem has won two in a row and has now caught Mamedyarov in second place. 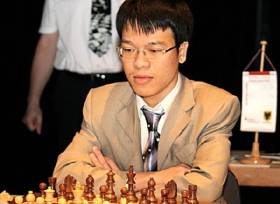 Up to equal second @ official site.

More news on Wednesday as tomorrow is a rest day!

The photos here are all by Georgios Souleidis from the tournament site. For more information (and further photos!) see the Official site