Bilbao is the largest city in the Spanish Basque region, and although it is often depicted as a big industrial port, in recent years it has diversified. It's most famous building is the Guggenheim Museum seen in the background of some of today's photos.

This year's Masters began with an additional prelimary section in Shanghai (from the 3rd to the 8th of September). Two players were invited direct to the final: Magnus Carlsen (winner of Wijk aan Zee, Nanjing and Bazna not forgetting the fact that he is World No.1) and Viswanathan Anand (World Champion and No.3 in the world).

The other two had to go through the Semi-Final. Shirov qualified relatively easily whereas it went down to the wire between Aronian and Kramnik, the Russian only making the difference in the Armaggedon Blitz decider.

The result wasn't as clear-cut as the final table would suggest as, for example, Shirov was in difficulties in both games against Wang Hao.

The double-round-robin has the particularity (see the table above) that a win is awarded three points and a draw only one. Another being that 'draws by mutual agreement' require the acceptance of the arbiter.

I consider these modifications slightly artifical but if they help to generate spectacular chess, why not?

Pairings for the first round on Saturday the 9th are as follows:

The time limit will be:

Tie-breaks (in the case that two players finish on the same number of points):

A two-game Blitz match (4' plus 3" increment) with the possibility of an 'armageddon' game (5' for White, 4' for Black who gets draw odds) if necessary. 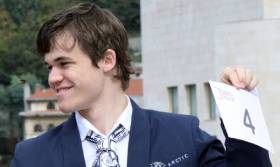 Magnus Carlsen picks the number 4 for the tournament! © official site.

For more information go to the

There will be a rest day on Tuesday the 12th, but otherwise you will be able to watch the games live each day from the following times: