In these 17th Russian team championships many of these teams are strong the whole way down as you'll see below. This is hardly surprising when one realises that 25 out of the World's top 100 are Russian.

There are 10 teams in the Premier league whereas there are seven teams (a curious number!) in the women's equivalent event that is running alongside.

Here are the leading three teams after 5 rounds:

A meeting between the European Champion and the highest rated player present.

So this aggressive move comes anyway, whereas in Gashimov,V-Boidman,Y Mainz rapid 2008, White preferred 9.♗c4 as the bishop is quite nicely placed on the a2-g8 diagonal.

If Black plays 9...h6 I imagine that there is nothing wrong with ♗-c4 in reply and the possibility of g4-g5 will be annoying if Black ever castles kingside.

Black's structure is arguably slightly 'compromised' but White will need to create some kingside action if he is intent on putting his opponent under pressure.

The e-pawn needed defending in view of ...b4. 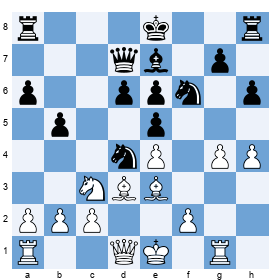 After 16.hxg5 hxg5 17.♗xg5 Grischuk no doubt intended 17...♖h3! and the weakness of the f3-square would come into the spotlight.

Preferring to keep the king behind the central pawn mass rather than playing the routine 19...0-0-0

Two can play at that game! Nepomniachtchi basically gets his king out of the way.

The open f-file is one of the advantages of having played ...fxe6.

Castling long by hand! White has to be careful about the backward pawn on f3 (a consequence of the enthusiastic g2-g4!?) but otherwise he seems to be holding firm

Using the under-employed knight to defend the main weakness (even from a distinctly passive square).

Time to un-castle by hand! 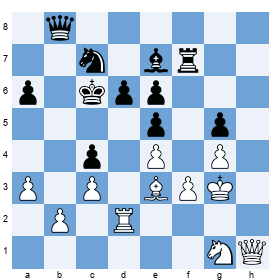 Hoping to keep out of trouble whilst holding onto f3. However Grischuk has noticed that the queen on b8 and the king on g3 are on the same diagonal and is tempted to exploit this.

Tempting but not advantageous. 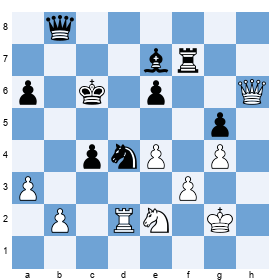 Suddenly Black's king is the weaker and he is a couple of pawns down.

Everything is falling to pieces so Grischuk tries one last shot at complicating matters.

White's opening didn't really work and Grischuk managed to obtain a clear advantage which he rather threw away, presumably in time trouble. So it doesn't just happen to us, even the top players do it!

The relevant information is in Russian as the English version is out-of-date.