In many sports, there is a 'Masters' event where the top players of the year are selected. The chess version is a recent idea, but quite a good one as it's great for chess fans to see these superstars competing against each other.

Each player has a logical reason for their selection. Wang Hao is the highest rated chinese player and Alexei Shirov the No.1 Spaniard.

Levon Aronian and Vladimir Kramnik are the World's No.s 4 and 5, with Aronian also being the holder from last year.

Two of these four will survive to the next stage.

Next month in Bilbao (9th to the 15th of October) there will be Magnus Carlsen (winner of Wijk aan Zee, Nanjing and Bazna not forgetting the fact that he is World No.1) and Viswanathan Anand (World Champion and No.3 in the world).

Veselin Topalov (No.2 in the Elo ratings) is the main absentee for these events, apparently for personal reasons.

There are some new rules in order to make the event more enjoyable for spectators (debatable, but the idea of discouraging draws has its supporters).

Sofia rule: No premature draws accepted (the arbiter and a technical assistant must give their accord!).

Bilbao point scoring system: 3 points for a win, 1 for a draw.

Tie-breaks: A two-game Blitz match (4' plus 3" increment) with the possibility of an 'armageddon' game (5' for White, 4' for Black who gets draw odds) if necessary.

The results of the earlier rounds were as follows:

A bad start for the youngest player as Aronian first obtained a comfortable game and then seized the initiative with alarming ease. Black's opposite-bishop attack proved to be too strong. 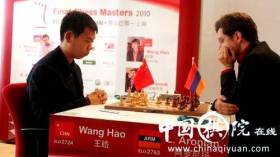 The early exchange of queens with White having the bishop pair led to a gritty struggle after Kramnik sacrificed a pawn for activity. Shirov activated his king which kept his position intact.

Shirov certainly came out fighting as he sacrificed a piece to prise open Aronian's king. The Armenian defended but Shirov was able to snatch several pawns and so had sufficient compensation.

An early exchange of queens again for Kramnik. Here he seemed to be comfortable throughout despite White having bishop for knight. Indeed at the end it was Wang Hao who had to be the most careful.

Wang Hao played aggressively, perhaps too much so, as he was eventually obliged to give material to keep his piece-play alive. Later on, he really should have drawn the endgame of Rook and Bishop versus Rook and pawn, although when time is short the defence is notoriously tricky.

In the other game Kramnik playing White had more space, but Black (Aronian) held firm in an uneventful Slav.

A disastrous loss for Kramnik who is now in serious danger of missing the party in Bilbao. Shirov played an old favourite of his (the double-edged 4 f3) but it was Kramnik who was better after the opening. The Spaniard defended well and gradually turned the tables.

Wang Hao put up the blockades and kept his position solid throughout. Aronian's Catalan looked toothless.

Two Catalans in the mini-match involving Aronian and Wang Hao and two model handlings for Black.

Shirov's two wins put him in the driving seat and he can already think about getting his tickets for Bilbao. Kramnik may have to beat Aronian with black if he is to catch him in the race for qualification. 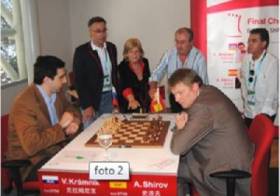 Follow the games live from 8h30 from the Spanish site (tomorrow and Wednesday) on http://www.bilbaofinalmasters.com/2010/