I had breakfast with Smyslov one morning in Graz, Austria when we were playing a closed tournament together in late 1984. At one point I asked him what his motivation was to keep playing tournaments. His reply was that once one had lived 60 good years, everything else was a bonus and one should just enjoy it. He kept enjoying his pressure-free attitude towards chess, until poor eyesight led to him quitting in 2001 when he was 80.

In 1954, as challenger, he drew with Botvinnik 12-12 in the World championship match, and then had to fight his way through the qualifying cycle to have another crack at the world crown. He managed to do so in fine style and next time was victorious in 1957, but his reign at the top was short-lived, as Botvinnik won the re-match a year later in 1958. 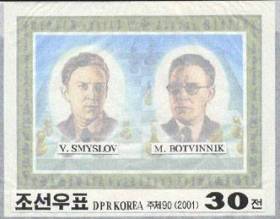 A Korean stamp from the period.

Here is a game played 56 years ago, almost to the day, from the match which Smyslov 'only' drew, three years before he finally became World Champion.

Now considered a somewhat risky system, but Botvinnik obviously wasn't satisfied with his loss two rounds earlier in the main line with 5...♗xc3+. 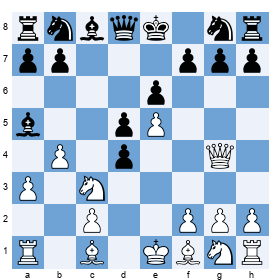 The asymmetric pawn structures lead to tense play in the middlegame. White has a kingside preponderance but Black has chances for counterplay in the centre, but will need to get his king to safety first. 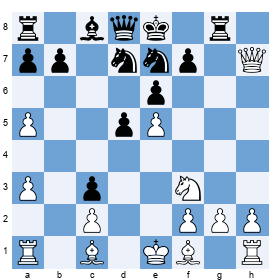 Preparing to use his bishop to pressurize the dark squares.

Better would have been 16...b6, but White would still have the better chances after 17.g4 ♘xd4 18.♕xd4 ♕xa3 19.♗d3 as the more influential minor pieces outweighs the importance of the pawn deficit. 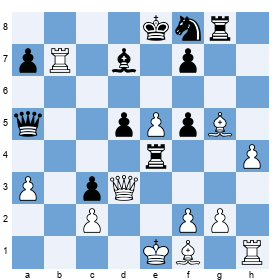 A nice combination which sweeps away Black's defences and wins material. 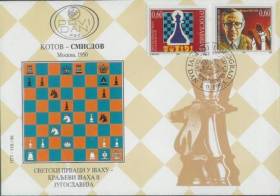 An envelope dedicated to Smyslov.