The final crosstable also shows that Kosintseva beat all her closest rivals.

The World number two Humpy Koneru must have been disappointed with only 50%. 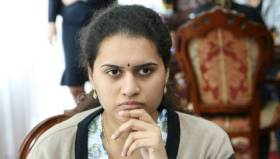 Here is the ranking list of the World's leading female players. With this near 2700-performance Tatiana will gain a hatful of rating points and will even overtake the other Kosintseva, sister Nadezhda! In fact this remarkable gain of 27.7 points would take her to number four in the world, just above Stefanova:

Four of the World's top ten were playing in the Nalchik Grand Prix:

For more information on the grand prix official tournament site