Aronian has already booked his place from the earlier legs of the Grand Prix.

The other players, in order, who are in contention for the remaining qualification place available are Wang Yue, Gashimov, Leko and Jakovenko. If any one of these players wins the tournament then qualification could be theirs.

In the tenth round Gashimov didn't do his own chances any harm by winning and moving to 'plus two'.

After a good start Inarkiev has been suffering of late. In this, his fourth consecutuve defeat, the opening up of the position seemed to suit White's pieces better and Gashimov's threats induced the Russian to sacrifice the exchange for which there wasn't enough compensation.

The main Grand Prix qualification contender, Teimour Radjabov, obtained the bishop pair and this plus his general activity proved to be more important than Akopian's central knight outpost. 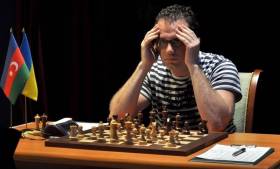 Of course Pavel Eljanov is the man in form. Apart from a fine series of wins in the Russian team championships, that has elevated him to his highest ever Elo, he has shown himself able to beat 2700 players with either colour and frequently from unpromising positions.

Here he obtained nothing from the opening, and it was only at the end of the time control that he was able to make a difference. Leko clearly underestimating Eljanov's strong rook manoeuvre.

With three rounds remaining many things remain possible, but the winner of Astrakhan will almost certainly come from the leading four players now.

As for the final Grand Prix qualifier, my money is on Gashimov! 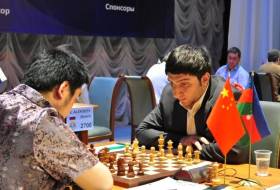